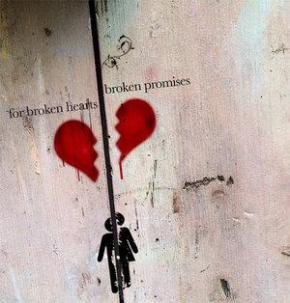 So what would you do if you broke a promise? What would be your reaction when someone made a promise to you and broke it, either intentionally or accidentally?

Amongst numerous incidents of broken promises that happened to me, I could recall several really bad incidents (make it three), two of which I was the disappointed one. The other one is when I was the one breaking the promise. I include the last one just to make it pretty much fair, and less dramatic.

Simply said, it caused me a really-really bad day (or at least half of it) with swollen eyes from too much crying and mal-functioning me. By time, eventually it’s forgiven but not so forgotten. That two disappointing incidents of mine involved promises to meet, just as simple as having lunch together or dinner together with someone, but on a special occasion.

The last one, where I was the one who broke the promise, was kinda different. Call me heartless, but honestly even though I did feel rather uncomfortable telling about the cancellation, then I just forgot about all that thing and carry on to enjoy my activity. Did I feel guilty? No, not really. Regrets? I might have some little bits pieces of those even to now. But since I don’t want to regret too much in life, I just put all that memory and feeling into unknown dump space in my brain. Like that.

Why do I bring up this not so pleasant topic?

Umm. I broke my promise to write a post in this blog, monthly on 21st.  And there are too much things I said to myself I would write about, but I haven’t. Sorry for that. I meant this writing as an apology to you and especially to me myself, for not fulfilling my words.

For you, those you who might somehow read and follow this blog. And me, just because. I owe myself better life quality and habit.

So then, it’s 24th of April already, and I suppose already passed by few minutes.
Broken promises is never good. Let’s do something about it.