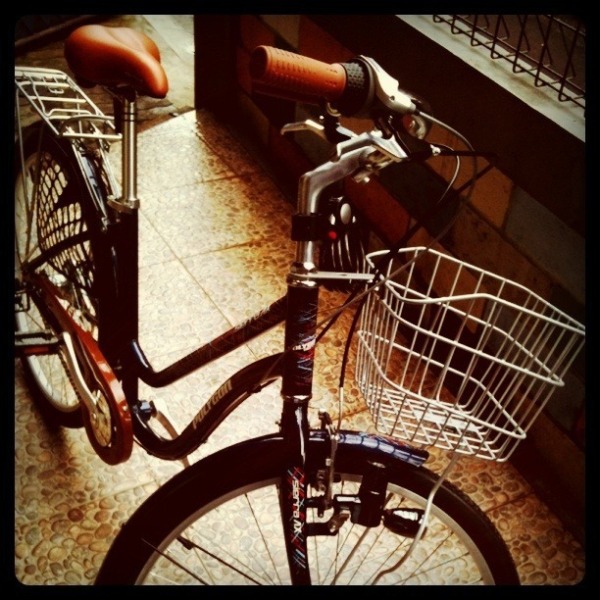 I know it’s a bit too write down about things I’ve experienced in February, it’s mid-March already for goodness sake!! But there are too many good things happened in February that I don’t want to forget about.. So here’s just a short recap of ny February. And a little highlight too :)

February 1st. Was my second day in my new office.
February 3rd. Chinese New Year! And it’s when I had the chance to borrow Cyclor’s bycicle! We spent half of the day on bike, trying out my route to work :D

February 4th. Went first time to office on a work day, and got chaperoned by Rangga Panji. Yay!
February 12th and 13th. Make up class held by Fahionese Daily! Lucky to be in the class, really enjoyed it! Plus, I had reunion with my uni friends too :D

February 14th. Had a #hugcampaign with friends from TEDxJakarta. Hugged lots of people. What a way to celebrate Valentine!
February 15th. Bought myself my own bycicle. Baptized her/him as Alexandra Levine :) Celebrated the day at That’s Life Coffee and Ayodhya Park :))

February 19th and 20th. Spent time with good friends, midnight biking as far as Pos Pengumben, experienced CFD with friends who will move out of town. Good memory to keep!

February 26th and 27th. Went to Bandung, had fun around, survived through my first outbound experience, and got lots of bruises on legs and arms. Fun!!

It’s March 15th already and it’s the Lunaversary of Levine, my dear bike :) She’s at home now, and hopefully tomorrow I’ll ride her to and fro :) so here I put a sight of her, when she’s fresh as a dew in the morning!